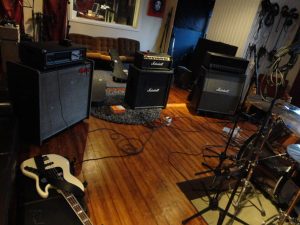 July 5th, 2012, we entered the studio for an uncomplicated jam/session. The seed was sown and Paranoid was born. Jocke and Åke made a couple of classic käng riffs/songs for the morning coffee, and the rest was done in the studio. This recording is what everyone else refers and knows as “Hardcore Addict“. There’s not much documented from this time, except a few photos from the studio room and the amp settings. We had no direct plans for this “studio project”, little did we know that we for a fact only a few years later would become a rehearsing band, release records and tour the world. Shout out to Nils, Åke and Johan who were with us and started this project/band.