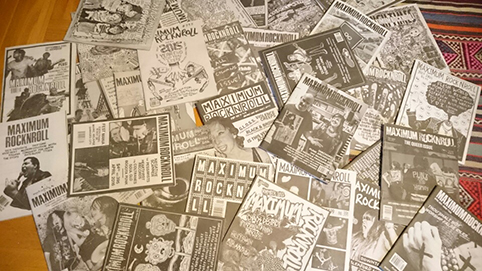 It took more than half the night to go through all my MAXIMUM ROCKNROLL magazines from three years back, and then enter all of the reviews into my computer. Whew! That MRR are filled with interesting reading did not make it go any faster, rather the opposite. Haha. If you have any interest in punk/rock (music) and not already a subscriber, start your subscription today, you will not regret it!

* PUNKDEMONIUM HELL
If you missed out on last year’s flexi, have no fear: here’s a spiffy hard vinyl release of the same tracks with a slick updated layout and a killer cover tacked on for good measure. The A-side tracks are excellent examples of PARANOID’s raw-punk-meets-early-black-metal attack, joining feral bass and D-beats to anguished throaty vocals and NIHILIST/ENTOMBED-style trebly guitar leads. B1 is nothing to write home about, a slow and unmemorable CELTIC FROST influenced plodder, but the side is redeemed by the energetic and entirely faithful cover of DISCLOSE’s “Nightmare or Reality”. This isn’t as essential as their Satyagraha LP, but it’s a solid release and well worth picking up if you missed out of the original pressing.
//Maximum Rocknroll #399, Andrew Underwood, 08/2016

* SATYAGRAHA
If it’s a concentrated sonic punishment you seek, look no further. Satyagraha is a necessary amendment to the ‘How to Insert Atmosphere of Uncertainty and Dread in Recorded Music’ Handbook, from the industrialized cacophony of the intro all the way through to the organ-driven funeral dirge at the end of the record. A level of ferocious noise that was last seen on the KRIEGSHÖG LP, and the first FRAMTID LP before that. Like a glistening chrome Machiavellian hammer of noise smashing its way through a mesa of bland tan rock, PARANOID breathes life, context and craft back into a style that has seemingly been losing ground to careless hacks, sameness, and colonization. Best record of 2015 but I heard it too late to make my official list.
//Maximum Rocknroll #394, Justin Briggs, 03/2016

* JAWBREAKING MANGEL DEVASTATION, SPLIT w/ ABSOLUT
Damn, the ABSOLUT side of this alone would have been a top ten of the year EP. Paired with the monster PARANOID material, this is unbeatable! Both sides effortlessly fold metal influences inte their raw punk attack, with ABSOLUT leaning a bit ’80s thrash and PARANOID incorporating elements of early black metal. ABSOLUT just kill on this split, offering up four (I wish there were more!) tracks of heavy hardcore which betray a serious DEATH SIDE influence that goes for the throat from the first note and doesn’t let up for a second. Catchy riffs, fantastic melodic solos and raw-throated vocals heavy with reverb lead the way, while the thick bass and straight-forward D-beats keep the material well grounded in punk. ABSOLUT may not adopt the label, but metal punks everywhere could learn a thing or two from the riffing and soloing (on “Peace System” in particular), while the fist-pumping chorus of “Mental Problem” immediately creates a mental image of studded punx running wild. PARANOID’s side is the more conceptually ambitious of the two; they work hard to create interesting MAYHEM-ish atmospheres before crashing into some straight-up Swedish mangel, with a touch of ’00s hardcore influence in the frequent riff/tempo changes. Sweet Sugi art on a heavyweight gatefold only adds quality to a record that would still be one of the best of the year if it came in a plain black DJ sleeve.
//Maximum Rocknroll #392, Andrew Underwood, 01/2016

* DESTROY FUTURE LESS SYSTEM
Five tracks of powerful KRIEGSHÖG/MORPHEME style noise drench from Sweden, with squealing guitars over a thumping rumble of hardcore charge with howling vocals. Burning on the edge of fast, the band repeatedly drops off and into powerful breaks and fulfills the style well, with dark mood and inventively squealing soloing guitar overtop. The Japanese fetish extends beyond music styling with a nice packaging of lyrics, band name and entirely in Japanese…which is kind of corny (There’s almost nothing in Swedish on the entire release) but it looks good and pairs well with Alexander Heir cover art. Lyrics are curt, with English translation about the hell of life, nuclear holocaust, corruption and the life of hell. Includes a sticker and nice two-color cover.
//Maximum Rocknroll #382, Ken Sanderson, 03/2015

* DISTORTION FAITH #1 – V/A
Shucks, are tapes cool! Some come through and it’s two songs per side and you’re done, and some include close to half an hour of blaring hardcore that has your brain gripped from star to end. Swedish label D-takt & Råpunk has been putting out some of the best in, you guessed it, D-beat and raw punk and this comp here is no exception. Featuring six créme de la northern hemisphere créme, all of them well immersed in the, you guessed it, D-beat and raw punk sound, each in their own distinct way: Vancouver raw racketeers SNØB, Sweden’s no-frills aggression WARCHILD, Russia’s psychotic, primal fury BLOODSUCKERS (super into it), Japan’s cerebral noisemakers KAFKA (top-notch), Sweden’s “distortion everything” punks PARANOID, and Finland’s explosive KOHTI TUHOA, with refreshing vocals and ideas that actually makes D-beat interesting again. Each band offers between two and four tracks apiece, all of them hard-hitters and, sans for one, all of them new and unreleased! Comes with über punk artwork and a fold-out with info on the bands. This label recently suffered a flood and almost lost everything, so they’re in the process of restoration, so make sure you spend some of that “fake paypal money” wisely-it’s worth it on every level.
//Maximum Rocknroll #380, Lydia, 01/2015

* HARDCORE ADDICT
Yet another project from the ELECTRIC FUNERAL/WARVICTIMS/MOB 47 camp (busy, busy punks!), pedigree enough to have you running for the nearest record shop. It helps that this is one of the most aggressively modern and unique bands that gang has produced. The blow-out vocal howls are familiar enough, but the D-beat gives way for some solid stop-start hardcore with many more hints of melody than you might expect. The first cut (“To Whom it May Concern”) may leave you with a false impression of what this band is all about, as it’s as solid and driving a slab of modern D-beat you’ll hear. I guarantee that by the final chaotic end of the EP closer “High-Tech Future” you’ll be scratching your head and wanting more.
//Maximum Rocknroll #368, Andrew Underwood, 01/2014