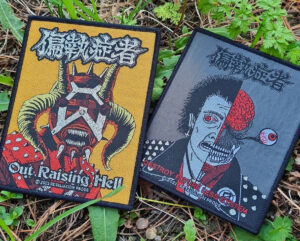 Official woven patches from Feel The Darkness/Retaliation Prods. We got a very few for sale for those interested. 55sek+shipping. We can really recommend their web shop if you need to pimp your vest or jacket for the summer.

“Altogether, a beautiful powerload. Music for the fast lane, for deconstruction, and for a flaming moshpit”
– MangoWave

As of today, Spotify is also officially cursed.

Taken from the upcoming album “Cursed”. Recorded, directed and edited by Voldac the villain. 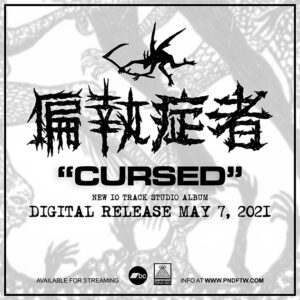 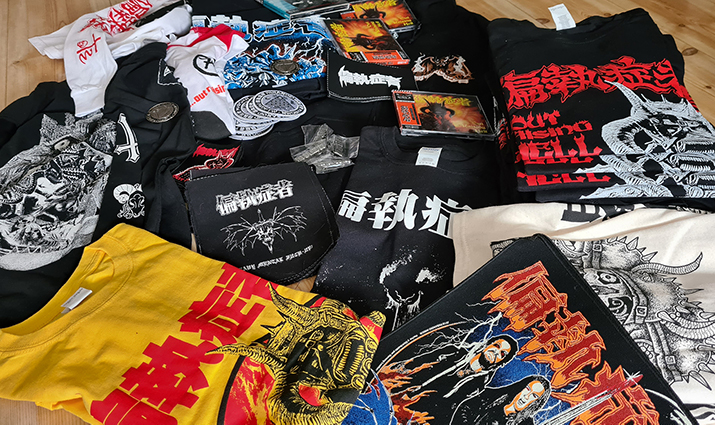 Discounted prices on everything in stock throughout May. Up to 50% off. Email your order to: pndftw@gmail.com 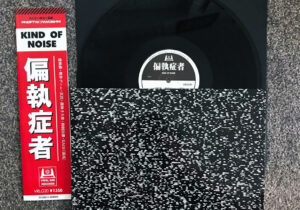 OUT NOW on Viral Age Records!
“Re-issue of 偏執症者 (Paranoid)’s Kind Of Noise7” with 2 bonus tracks from the super rare ‘KAOS’ Flexi. This release sees paranoid do what they do best, raging noise drenched, metal tinged d-beat chaos! 350 copies, 1-sided 12” on black vinyl with obi strip”

How long did it take for this record to be made? Did it begin pre-covid?
H: Yeah, it took forever to get done, haha. We started in April -19, and the intention was to be done with the recordings before our tour with Zyanose and Sex Dwarf, but we were barely able to finish the drums by then. Then we just did a bit little now and then whenever we had the time. I don’t think we were done until February this year, so just the recordings almost took a year.

J: As Henke says, our goal was to record the entire album in the spring of 2019. The idea was to have Joel mix it while we were out on the European tour. But, things never go as planned. It had been an intense start to that year. First rehearsing new material for the new album, but also recording songs for a split 7″ with Sex Dwarf (which was to be released for our tour) and the release of the N.W.O.B.H.M. compilations. On top of that, rehearsing a setlist and organizing everything which needs to be done before a tour (keep in touch with all the promoters, book a bus/ferry, backline, print merch and so on). So when we got back home again, at the end of May, we were pretty sick and tired of everything that had to do with the band. Our backline, instruments and merch boxes remained packed and untouched until the end of September. We were done with everything around the record and had just sent all material to the pressing plant at the same time as the pandemic took off. We had plans and a few dates already booked to play in connection with the release of the album. But again, things never go as planned.

How was working with Joel Grind? VOMITING is based in Portland OR so he’s kind of a local legend.
J: I’ve wanted to work with both Joel and Jack Control for quite some time, but there has never been a good opportunity or really worked out, until now. Super thrilled about it cause I’m a big fan of their previous works, bands and productions. When we initially reached out they both responded with a humble and good attitude and I got a great feeling right away. Easy going guys, very easy to deal with. I knew they would do this recording fair and I couldn’t be more satisfied to be honest.

H: It was a truly great experience, he’s a real pro. Really managed to pull off the sound we desired. Even though we may be a bit vague when it comes to explaining what we want, it felt like he really understood us and delivered the perfect mix for this album.

What do you miss most about touring? What do you miss the least?
H: Long and tiresome transports is definitely what I miss least, we’re based quite a bit up north in Sweden, so just getting to Stockholm is about an 8-hour drive. And there can be a lot of waiting around at the venue sometimes, which is a bit dull. But otherwise you really miss most things about touring at the moment. Getting to see new places, meeting new people, playing with other killer bands, partying etc.

What bands were you listening to the most during the creation of OUT RAISING HELL??
J: I often lack that primitive, unpolished and raw sound as most bands had in the 80’s in a lot that’s released today. They had some kind of spontaneous and genuine feeling in their songs and sound that I can miss at times. You know, bands like Bathory, Onslaught, Whiplash, Possessed, Hellhammer, Tyrant, Sodom and Venom just to name a few. It’s mainly these bands, and similar, that I have listened to and been inspired by during the writing process of this album. Mixed with a touch of punk classic acts such as The Exploited, Crucifix and G.B.H. Always Iron Maiden and always Disclose. Although it may not be heard at all.

H: Some albums I personally recall listening to a lot and probably being particularly influenced by around the time of the songwriting/recording process: Bulldozer – ‘The Day Of Wrath’, Warfare – ‘Metal Anarchy’, Aura Noir – ‘Out To Die’, Deathhammer – ‘Chained To Hell’ and Birth Ritual – ‘The Wild Evil’.

What inspires your lyrics?
H: It can be a bit of everything. The contemporary world and its structures, war, human nature, religion, history, horror etc. Second song on the new LP is a bit of a corny sci-fi inspired Voivod-ish piece, haha.

What do you think of the future? Is there any hope in believing in the leaders of the world??
H: It doesn’t really feel like the development is going in the right direction, no. You’ve got maniacs on pedestals everywhere, and more of them will surely pop up in way too powerful positions here and there if it goes on like this.

Cheeky question: the demon looking fella on the cover somewhat resembles SACRIFICE JAPAN’s armored mascot. Was this intentional on behalf of the artist or a happy coincidence?
H: I think that was pretty much a coincidence, don’t recall any of their covers being among the references we gave the artist. Some of the artworks we were inspired by were X-caliber’s ‘Warriors of the Night’, Vicious Rumors’ ‘Soldiers of the Night’ (some original album titles here, hah!), Exumer’s ‘Possessed by Fire’ and Pokolgép’s ‘Pokoli Színjáték’.

J: I would say both yes and no. The folder we sent to Anton contained all sorts of references with over 100 pictures and images, if not even more. It was everything from record covers and movie posters to comic books and medieval weapons, masks and armor. When I look at the final cover artwork that he painted for us I see a great mix of Mad Max, Dio, Judge Death, Mercyful Fate, Alien (details from the drooling mouth), Anti Cimex, H.R. Giger, Panzer, Rome 2033 and Destruction (details on the outfit) as well. He did a fantastic job, beyond anything we dared to hope for. Ever since I saw Iron Maiden’s album covers as a kid, I’ve always dreamed and wanted a classic full color heavy metal cover. Check! One less thing on my bucket list.

What do you think of the current d-beat scene? Any bands you wanna shout out?
J: Alive and totally kickin’ ass! I would probably say that Languid, Destruct, Braincëll, Warchild and Löckheed belong to my current top five that I can highly recommend to anyone. It’s very difficult to be impartial when you run a DIY label focused on d-beat, hardcore and punk yourself. I’ve had the pleasure of working with bands like Extended Hell, Anti-Metafor, Lái, Absolut, Scarecrow, Anatomi -71, Svaveldioxid, Blinded Humanity, Dispose, Sex Dwarf…and the list goes on… Obviously, all of them are also most definitely worth checking out.

H: It’s definitely in a great place, lots of great stuff being made. My top five of the year thus far when it comes to albums released would be Exploatör, Sial, Subdued, Laí and Zyfilis.

THANK YOU FOR YOUR TIME!!! HAIL PARANOID
Cheers for your interest and for keeping the flame of the underground scene alive and burning. Long live the trve zine-making, keep up the good work. Kanpai!!

Fourth album in the making! 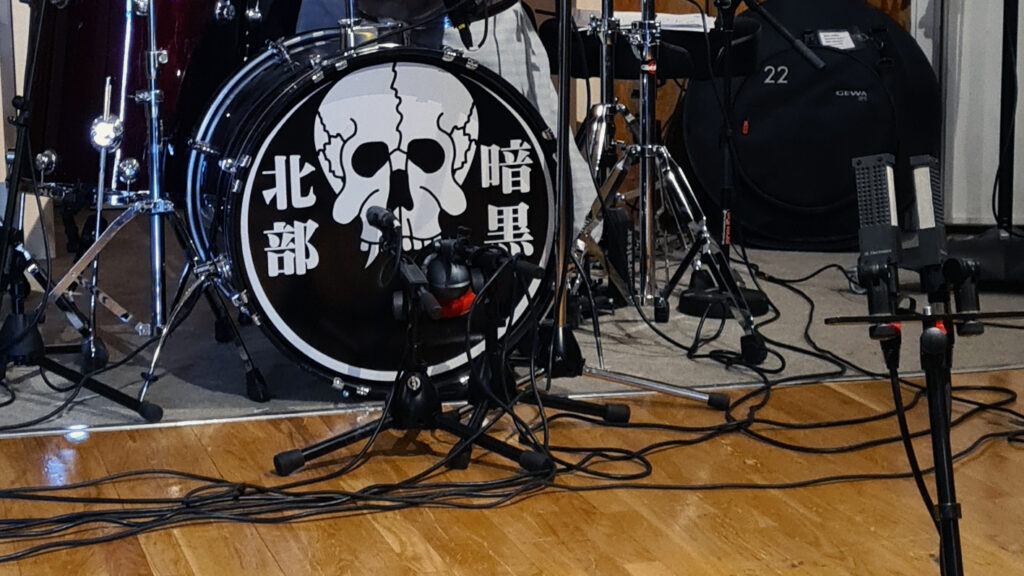 Heavy mental freaks and die hards! We’re excited to announce that we got started with the recording of our fourth album today. Being under restrictions and limited in doing things we otherwise normally do (such as playing live), has given us an opportunity to put full focus on writing new material and rehearsing without interruptions instead. To be continued…